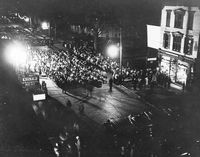 The clocks will be turned back 100 years to 1917 Thursday night in Schoharie.
On Thursday, the village of Schoharie will re-enact a significant milestone in American cinematic history, Schoharie’s Free Open Air Street Movies which ran every summer from 1917 to 1942.
The festivities will begin at 7pm, and then at around 9pm, when it is dark enough, on a screen hung from the original lampposts in front of the county courthouse, attendees will view a brief documentary on the history of the street movies before a screening of the only surviving reel from The Awakening of Helena Richie, the first motion picture to ever light up the night on Schoharie’s Main Street 100 years ago in the same location.
That unique and historically significant outdoor movie presentation, which many people watched from their automobiles, pre-dated the country’s first commercial drive-in theater by 16 years, according to Dwight Grimm, who has produced a documentary on the movies in Schoharie.
The event will kick off with live period music, antique automobiles, five-cent sodas, popcorn, cotton candy and more.
An official opening ceremony will highlight the significance of the trailblazing vision of former Schoharie Mayor Perry Taylor, who first brought the street movies to life in 1917. The rural ingenuity of former head projectionist Edward Scribner who showed the world’s first outdoor “talkie” (motion picture with sound) will be recognized with a portion of Manslaughter, seen on the Street Movies’ screen on June 18, 1931.  Invited guests include federal, state and local officials, who will speak to the assembled crowd as the sun goes down and the restored hand-cranked projector warms up.
Prior to the ceremonies will be an opportunity to speak with Mr. Grimm, a street movie historian and co-owner of the Greenville Drive-In, who has produced a short documentary on the history and significance of the groundbreaking event.
Those attending should bring their own chairs.
The planning has gone well and the film will be picked up next week from the library of Congress, Mr. Grimm said Thursday. The first reel of The Awakening of Helena Richie, about 11 minutes long, will be shown. The first reel of Manslaughter will also be shown, is about 10 minutes long.
The projector is coming in from Boston, Mr. Grimm noted. It will be the same model and vintage as the one at the Old Stone Fort which Mr. Scribner operated.
It is likely that the one at the Fort was “Frankensteined” by Mr. Scribner with parts from other projects, Mr. Grimm reasoned.
Main Street will be closed in Thursday. In case of rain, the event will be held on Friday night.
Festivities will continue on Saturday from 5 to 11pm with a community festival including antique car and radio exhibits, jazz and swing bands, a film-themed flower show, and after dark a repeat exhibition of The Awakening. short subjects, and The Adventures of Robin Hood, 1938’s most popular movie.
The festivities will be held behind the county building in the parking lots.
The new plaza in front of the county building will be used and the band Burnt Hill Melody Makers and Nisky Dixie Cats will perform.