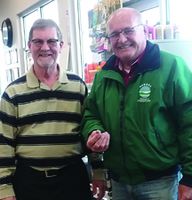 In the summer of 1972, a young man from Cobleskill was traveling to Western New York.
On his hand was the 1971 shiny class ring his parents had carefully saved $100 to purchase for him.
He stopped at a diner in Elma (east of Buffalo and Lackawanna), went into the bathroom and removed the ring to wash his hands…and walked out, leaving the class ring behind on the sink.
Several miles down the road he realized what happened, hurried back to the diner to retrieve the ring, but it was gone.
Forty-six years later, in August 2018, Steve Burch of Freedom, was going through his father’s belongings after his recent death when he came across a scarcely-worn class ring from 1971 from Cobleskill Central School.
When Mr. Burch asked his mother about the ring, she shared the story of his dad finding it on a bathroom sink in a diner back in 1972.
She told him his father had thought the ring was real gold and valuable,
When he realized that wasn’t the case, he put in a box and it was forgotten about--until his son found it—and his mother urged him to find the ring’s rightful owner.
Mr. Burch called the Cobleskill-Richmondville Central Business Office, where his out-of-the blue request and the story behind it intrigued Lisa Zaba-Miller and Kathryn Hensel—who turned to a musty, old 1971 yearbook.
After narrowing down possible owners, they realized the likeliest of them—Bill Johnson—lives next to the school and they contacted him with the story.
After several conversations, Mr. Johnson and Mr. Burch agreed to meet in October to exchange the long-lost ring—which still fits, shiny, unworn, and in excellent condition--though on Mr. Johnson’s pinky finger.
In another twist of fate, when Mr. Burch shared the story with friends at church, his pastor shared that his father, Keith Apell, taught in Cobleskill in the 1970’s.
“What a small world,” said Mr. Johnson. “It is amazing how one small ring can bring total strangers together and complete an entire circle of a story. What a wonderful, thoughtful, and kind-hearted person Steve Burch is to take the time to track down the school, decipher the inscription, and make sure it was returned to its rightful owner. Without the efforts of the CRCS staff researching this request, this whole story would not have been possible.
“See? There are people in this world who go above and beyond for others to bring about happy memories from times long ago. This only shows the goodness in total strangers who try and make someone’s day a little brighter.”