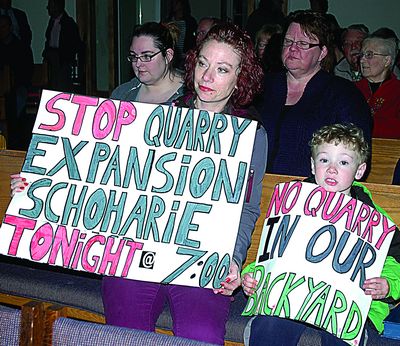 Speaker after speaker blasted the proposed settlement between the Town of Schoharie and Cobleskill Stone Products Wednesday evening.
In a meeting that had to be moved to the United Presbyterian Church on Main Street, more than 25 people spoke against the agreement that would allow CSP to expand it mining area in exchange for ending future legal battles with the town.
One person spoke in favor of taking the settlement.
The town board took no action on the proposed agreement last week. Supervisor Chris Tague, who works for CSP, excused himself and did not attend the public informational meeting.
The legal battles must end, resident Peter Johnson told about 160 who filled the church Wednesday, but "this is simply not the way to do it."
Like many of the speakers who followed him, Mr. Johnson said the settlement was one-sided and did not benefit the town.
"This one is terrible," he said of the deal. "It concedes everything of substance to CSP and almost nothing to the town."
The town, he added, has spent about $700,000 in legal battles in the last 11 years since the expansion was announced.
If the settlement is accepted, he argued, that "money would have been wasted."
If the expansion goes ahead, he explained, "Schoharie will become a mining town and we will see the slow deterioration of all that we value."
The only way to stop that, he added, is to turn down "this narrow, short-sighted, and one-sided agreement."
He asked board members to "act for the people of Schoharie and not for the narrow interest of a private company..."
"Listen to the people," he added to a rousing round of applause from those who filled the pews and balconies of the church.
CSP representatives have argued that the company has a vested interest and should be allowed to expand its quarry, but Village Mayor John Borst argued, "We also have a vested right and a vested interest in this valley."
Quoting a village resident, Mayor Borst explained that the expansion is a "quality of life" issue.
"The dust from the plant is immense," and "there is no mitigation, no nothing."
Showing board members photos of the dust that envelopes the areas around the plant, he noted, "My grandkids have to breathe that crap every day."
He added, "There is nothing that company does to stop it."
The village has been against the expansion for 11 years and "nothing has changed that would make us settle."
He argued against "the straightjacket this settlement puts the town board in. It's just the wrong, wrong thing."
Speaking to the town board members, he said, "You guys are going to make history."
The board members, Alan Tavenner, Matt Brisley, Floyd Guernsey, and James Schultz, will either be remembered as those who "upheld the values of this valley, or the ones that flushed it."
To a standing ovation, Mayor Borst added, "This settlement is punitive and vindictive."
Despite supposed concessions, speakers argued that the agreement did nothing for the town and village.
"The people that lose here are the town, village, and citizens," argued Albany attorney Meave Tooher, who is representing the village.
"The mining company makes out like a bandit," she said to a standing ovation.
The town, she explained, gives up almost all its rights in the agreement.
This stipulation takes away the town and village's rights to enforcement. At a minimum, she added, the agreement needs to be modified so that the town and village become part of this enforcement.
"It's so lopsided and unfair," resident Jennifer Mosher added.
"Even if we lose (the lawsuit) we'll be better off."
Ruth Anne Wilkinson implored board members, "We cannot even think of folding...It's not time to fold. We have miles to go before this fight is finished."
Several speakers questioned the character of those at Cobleskill Stone.
"You're not dealing with an honest man," offered resident Patti Conboy.
"You are all being sold down the road."
Resident Angela DeGroff recalled when they sold the land to a young man who they did not know would turn the land over to CSP 11 years ago.
"We were hornswaggled," she said Wednesday.
"It was a lie from the get-go and it won't stop."
One person did speak in favor of the settlement.
Resident Eric Pollard said he was in favor of settling.
The town, he added, has spent a lot of tax dollars and they could be used in other areas.
He noted that new board members were elected to the town board last year and those voters knew where the new members stood on the issue.
Resident Neal Klein urged town board members to vote against the settlement and to side with residents.
"Our opinions are your opinions," he told them. "Your personal opinion has to be put aside."
Schoharie resident and Assemblyman Pete Lopez said he was part of the mine expansion in 1995. The public was part of that process, he noted.
"It comes down to what do we want here?" he added. "At this point, it's your watch.
"It boils down to quality of life.
"It can't be for anything other than what's best for Schoharie."
He told board members that they need to take what they have heard from their neighbors "and you take it to heart."
Bob Montione of Save Our Schoharie presented the town board with a petition against the settlement signed by 591 people.
Under the proposed agreement, in exchange for ending future legal battles with the town, CSP would get the right to expand its mining area near Rickard Hill Road. Cobleskill Stone would also agree to give several concessions including a smaller expansion and a larger buffer area.
The proposed concessions have been panned by several leaders of the group Save Our Schoharie. Those leaders have also said that the town board members do not need to approve the agreement tonight.
The settlement agreement is on the town website.